ROAD TO THE WORLD CUP

Previous Next
ROAD TO THE WORLD CUP 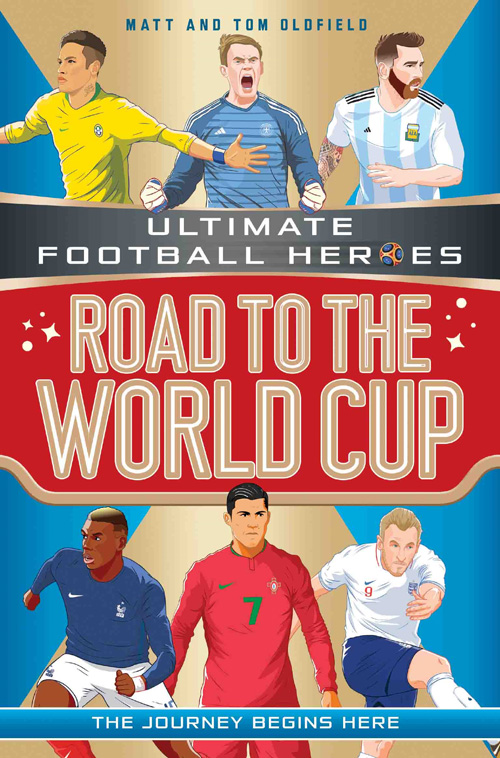 In this special limited edition book, live the journeys of six football heroes as they begin down the road to World Cup glory. Learn how star players Harry Kane, Lionel Messi, Cristiano Ronaldo, Neymar, Manuel Neuer and Paul Pogba, stepped up for their national sides, and brought them through qualification – ready to go head to head for the 2018 World Cup.

What the readers have said

“This topical book reflecting a popular current event is packed with inspirational and motivational stories about the journeys of six top footballers. The best thing about this book is that it will appeal to both football and non-football fans because of the style the book has been written in. I recommend this book. ”

“I loves this book as it contains lot of information about best footballers in the world like Neuer, the best goalkeeper and Messi. My favourite part was to read about Christiano Ronaldo when he got hurt but still he supports his team and shows the good team spirit. I would recommend this book to all football fans. Reading this book was more interesting because of World Cup being going on.”

“World Cup ready! Great book for the younger football fan – gives a taster of the individual books, which my son a large collection of. At 10, he’s outgrowing them now but he’s still enjoyed this one.”

“It’s been read by quite a few children in Sea Turtle Class – we had a waiting list! As we were all caught up in World Cup Fever it was very topical. Some children just chose to read chapters about footballers they already like (Harry Kane been the most popular) whilst others read it from cover to cover. It’s now been borrowed by a boy coming up into Sea Turtles in September & I’ve been persuaded (begged) to buy some others from the series.”

“This book is excellent for all fans of the world cup. Given France’s success, i found the Paul Pogba section particularly gripping. However, it would be better if it included statistics about each of the players mentioned. I would have given it 5 stars if not for one MAJOR flaw; the book doesn’t include Muhammad Salah!”

“I enjoyed reading this book as it is very informative and interesting book. I liked reading about my favourite player Cristiano Ronaldo. It gives information about journey of 6 best football players in the world. It is a good book to read especially at the time of World Cup. I am sure football fans would love this book.”

“I like that the book has Harry Kane in it. I learned lots of new facts about him which has made me like him even more than I already do! I also like Ronaldo because he’s one of the best football players on the planet. I’ve watched a few World Cup games and seen the players from this book. Right now I’m watching a game with Pogba and Messi playing in it which is really exciting! The book tells six players stories with loads of facts in there as well. There are drawings in the book of each player which are really well done. I would recommend this book to football fans or people who want to know more about the players it features. The players are – Harry Kane, Lionel Messi, Cristano Ronaldo, Neymar Jr, Paul Pogba and Manuel Neuer. It has been lots of fun to read during the World Cup and all my football friends at school keep borrowing it to find out facts for themselves!”

“The children aged ten and eleven enjoy reading this series of football books. I continue to purchase them quietly and ‘drop’ them onto their Kindles when they least expect.”

“A brilliant book. My 7 year old loves it. He read it from front to back in two days. He reads sections of it daily.”

“A good book to get my reluctant reader son reading this summer.”

“Great books. My boys have the whole series so had to buy this addition for them to read before recalled cup started. They loved it. It’s as good as all of the others. As far as I’m concerned, anything that encourages my boys to read, is a worthwhile purchase!”